On March 22nd, India’s top oil refiner Indian Oil Corporation hiked the prices of petrol and diesel after almost 140 days of stalling. This comes after a massive surge in global crude oil prices–the key factor in determining domestic fuel rates–driven by Russia’s invasion of Ukraine and the subsequent Western sanctions on Russian-sourced oil.

Despite these sanctions, the Indian Oil Corporation recently purchased three million barrels of crude oil from Russia at discounted rates–something that has not sat well with Western leaders. Jen Psaki, US President Joe Biden’s spokesperson, said on Monday regarding the issue that while the US understands the economic reasoning, “the rest of the world, is watching where you’re going to stand as it relates to conflict, whether its support for Russia in any form“.

Reactions like these, that highlight India’s need for oil yet urge the country to look beyond economic needs, have caused great uproar among some commentators and the Indian government alike. They claim that since India imports 85% of its oil needs, the decision to buy Russian oil was one of necessity and not one of active choice. Further, fingers have also been pointed at European nations that continue to buy Russian oil in large quantities.

India, as a developing country, has a large middle class that is very sensitive to income shocks, i.e. a steep fall in income due to events like rising crude oil prices. High prices for oil on the global market means that the cost for almost everything increases (inflation) since most industries depend on oil products. This leads to people ultimately having less money in their pockets because incomes remain constant while expenses increase dramatically.

Understandably, a population with less money is prone to civil unrest. A harrowing example of this is Sri Lanka, which is battling its worst economic crisis since the nation’s inception and the subsequent public unrest. Among other factors, surging oil prices have left the country dry of petrol and diesel in its fuel stations. The government has now called in the army after two men were reported to have died while waiting for petrol.

This could explain why the Indian government has been firm in its aim to avoid oil insufficiency. A recent paper by Economist Pranjul Bhandari calculated the effects on the Indian economy if oil were to be priced at $100 per barrel for an extended period. The paper forecasted around a one per cent decrease in India’s GDP if that were the case. To put that yardstick into context, the current prices are above $115. These are India’s legitimate economic interests. But, does buying oil from Russia actually fund its military capacity?

Vladimir Putin has been the de facto head of state for Russia for more than 20 years now. In that time he has built around himself a helpful cadre of Billionaires and Oligarchs who fund his political and military endeavours. Many of these people are in the oil business and hence, when Indian companies buy oil from them, the money does go into Putin’s vault indirectly.

Although, as pointed out in Rajya Sabha by Minister of Petroleum and Natural Gas Hardeep Singh Puri, India imported less than 1% of its annual requirement from Russia last year. So the impact of Indian purchases on Russia’s military capacity seems minuscule. This is especially low in comparison to the European Union, which relies on Russia for 27% of its crude oil. India is buying oil from Russia only because it is cheap oil and not because it is Russian oil.

It must also be pointed out that the Western concern that this move signals India’s affinity towards Russia is not fiction. Over the years, Prime Minister Narendra Modi and Vladimir Putin have developed close personal ties. This is arguably one of the reasons Joe Biden has gone on record to call India’s confrontation with Russia “shaky”. Taking into account India’s abstentions at the UN and the fact that the country is considering a direct Rupee-Rouble corridor to bypass US Dollar based sanctions, this fear does not seem beyond a reasonable doubt.

Moreover, Professor of Political Science Oleksandr Svitych has pointed out in an opinion article that even from a utilitarian perspective, showing overt solidarity with the tightly banded NATO countries also has economic benefits. Put plainly, siding with the ‘good’ side has long term benefits of cooperation and progress. In the meanwhile, India can source its oil from other oil-producing nations and bear the cost of ‘good’ behaviour for later returns.

This liberal internationalist perspective misses one crucial point though. None of the top ten oil-producing countries, barring Canada, have a great track record of human rights. The list includes Saudi Arabia, the largest exporter of oil to India, which has consistently conducted unlawful airstrikes in Yemen. This fact effectively makes it so that if India were to start buying more oil from countries like the UAE or Kuwait in lieu of Russian oil, we would still be funding unlawful killings, unjust wars and brutal autocrats. Since switching producers does not solve the problem of giving money to bad actors, we can just buy from the cheapest autocract around, the argument goes. In this case, the cheapest autocrat happens to be Vladimir Putin. 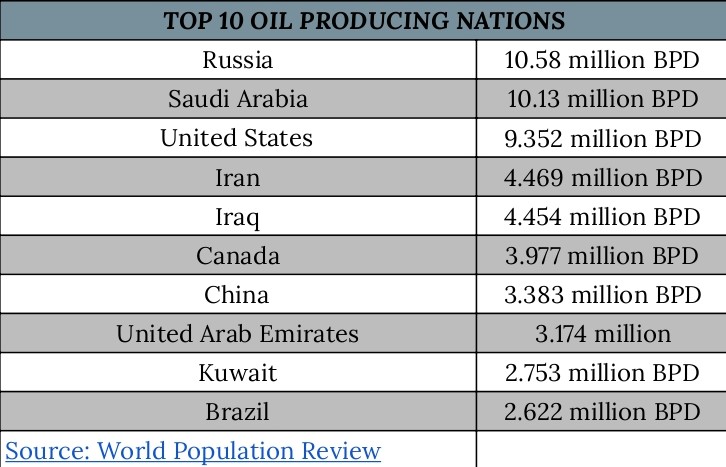 Thus, it would be economically and politically imprudent for India to not buy oil from Russia at this moment. Though, India does need to come out with a stronger stance on Ukraine for us to be able to shelter the western anger over it in the long term.

Rutuparna Deshpande is a second-year student of Politics, Philosophy and Economics at Ashoka University.

We publish all articles under a Creative Commons Attribution-NoDerivatives license. This means any news organisation, blog, website, newspaper or newsletter can republish our pieces for free, provided they attribute the original source (OpenAxis).